Founded in 1981, Société Fadoul Technibois (SFT) is a major player in the construction sector (Buildings & Civil Engineering) in Burkina Faso.

Thanks to the constant effort of its entire team, the company has been able to diversify over the years and has acquired know-how and solid experience in the management of its construction projects.

The 1990s were marked by major construction projects, such as the rehabilitation of the Presidential Palace, the SONAR headquarters, the gear factory in Diébougou for SOFITEX and by major hydraulic works such as the construction of the Niofila and Tourni dams, the drinking water supply of Bobo – Dioulasso as well as numerous civil engineering works such as the Bolmakoté water tower. The 1990s also saw the first contracts executed outside Burkina Faso, such as CRAAE in Abidjan.

The 2nd millennium was also the beginning of the company’s development in the road sector with the maintenance of dirt roads, the completion of asphalting work on the Ouaga-Léo, Ouaga-Kongoussi road and other road works. The company also demonstrated its ability to carry out the most complex works such as the West Ouagadougou Gate Interchange and the three Kara bridges in Togo. During these years, SFT continued to export its know-how by executing contracts such as the 2002 CAN works (asphalt roads and gutters in Bamako), the development of roads in San Pedro (Ivory Coast),…etc.

SFT’s achievements can be counted by the hundreds today and have consolidated SFT’s reputation as a company capable of meeting challenges requiring extensive technical expertise and a high level of competency.

Our most valuable assets are our human resources resources, which are able to adapt to the company’s various areas of activity, as well as our equipment, which is constantly being renewed.

SFT is attentive to its customers, who are the true reflection of its brand image.

Our motto is a few words:

Respect for the agreements made, the word given, good practice, the rights of all stakeholders, the environment…

We are proud to be an African company which is fully and naturally integrated into its socio-economic environment,

Of our activity, our countries and the potential of our employees.

Driven by a passion for building, SFT has established itself as one of the most important companies in the sector through the quality and diversity of its achievements.

It strives to develop trustworthy relationships with its clients.

SFT is part of the Fadoul Africa group, which gives it multiple advantages in terms of synergy, logistical support and expertise in the specific data of each market.

The Fadoul Africa Group, a multi-disciplinary group with more than 100 companies, has firmly established itself in most West and Central African countries for more than 35 years thanks to its human, logistical and financial resources, which enable it to be very responsive to the needs of its clients.

This is SFT’s “historical” activity.

We present ourselves as a general contractor, capable of handling all types of projects.

Our teams are able to handle all the coordination problems specific to building projects, which are multidisciplinary in nature.

We have carried out hundreds of projects in all fields:

We use all kinds of techniques related to deep foundations or soil reinforcement:

Each work is a challenge to be met and to overcome.

We are particularly attentive to the quality and sustainability of the projects we handle, and we ensure that we master all the technologies involved, including the most recent ones.

Our works, like all our other achievements, reflect our desire to be sustainable in the long term.

With a fleet of more than 300 machines and technical expertise acquired over the years, SFT is able to carry out earth moving work and the building of the most complex paved roads.

SFT uses its expertise in hydraulic structures in the construction of:

In situ or in the factory, SFT is able to use prefabricated molds equipped with vibrating tables and protective covers to guarantee incomparable speed of execution as well as exceptional concrete quality and strength.

SFT has a complete metal transformation plant in the industrial zone of Gounghin in Ouagadougou: Folding machines, shears, winding machines, Nertazip, Plasma cutting,… SFT has all the means to carry out all metal construction work: Reservoirs, frames,…

Whether it is in pre-tension or post-tensioning, SFT masters all aspects of this technology and has already carried out several pre-stressing works: Flat-slab anti VIBRATION slabs or successive corbelled bridges.

Fadoul Technibois has all the latest technology laboratory equipment in-house to control the quality of the work and materials in real time.

The respect of our qualitative commitments has always guided our quality management policy. As such, and well before the QAP (quality assurance plan) was contractually required, we had implemented very rigorous procedures to monitor the quality of our work. This concept is now part of the DNA of our teams, which systematically sample for internal testing.

Having hundreds of machines and trucks is one thing, ensuring a high availability rate to operate them to meet the deadlines set for each project is another and far more complex one.

SFT’s affiliation with the Fadoul Africa Group gives it access to preferential channels for the supply of spare parts and consumables.

These logistics, made available to SFT and served by qualified personnel with well-established procedures, ensure the high efficiency and availability of our means of production.

SFT is an integrated company and ensures its own supply of aggregates, asphalt, concrete….

Fadoul Technibois has positioned itself as a specialist in prefabrication with a unique know-how in the sub-region.

In situ or in the factory, SFT is able to use prefabricated molds equipped with vibrating tables and protective covers to guarantee incomparable speed of execution as well as exceptional concrete quality and strength.

This process has recently been used during the construction of the interchange in Ouagadougou or also during the execution of the prestressed box bridge by successive corbelling from Aného in Togo. 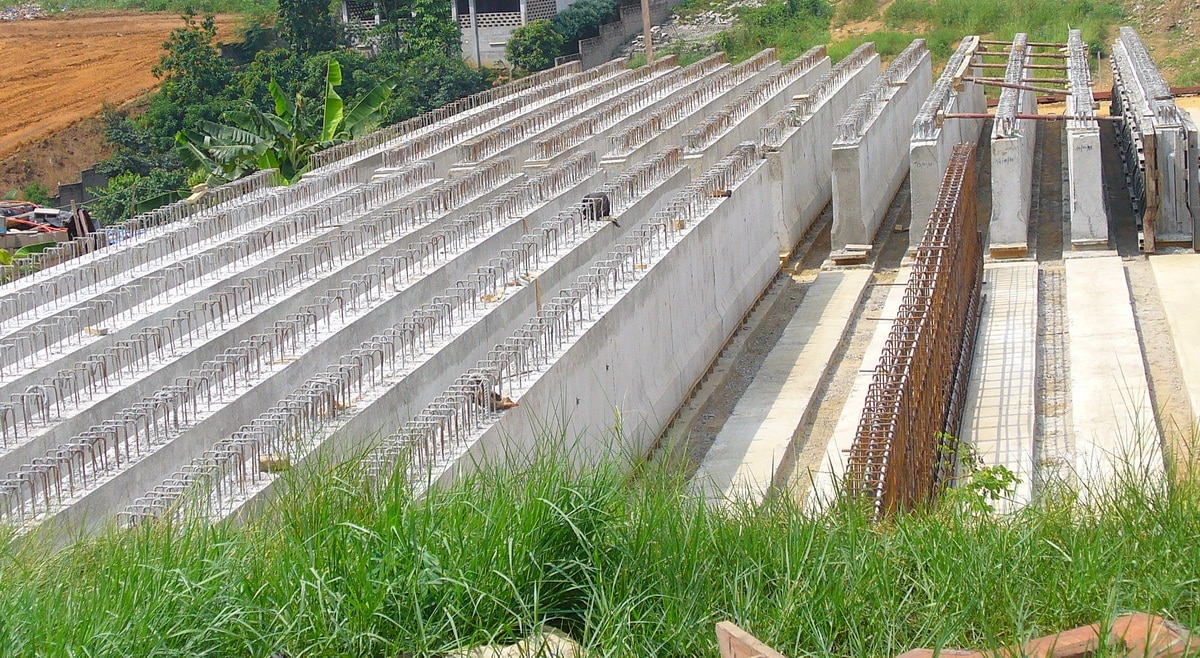 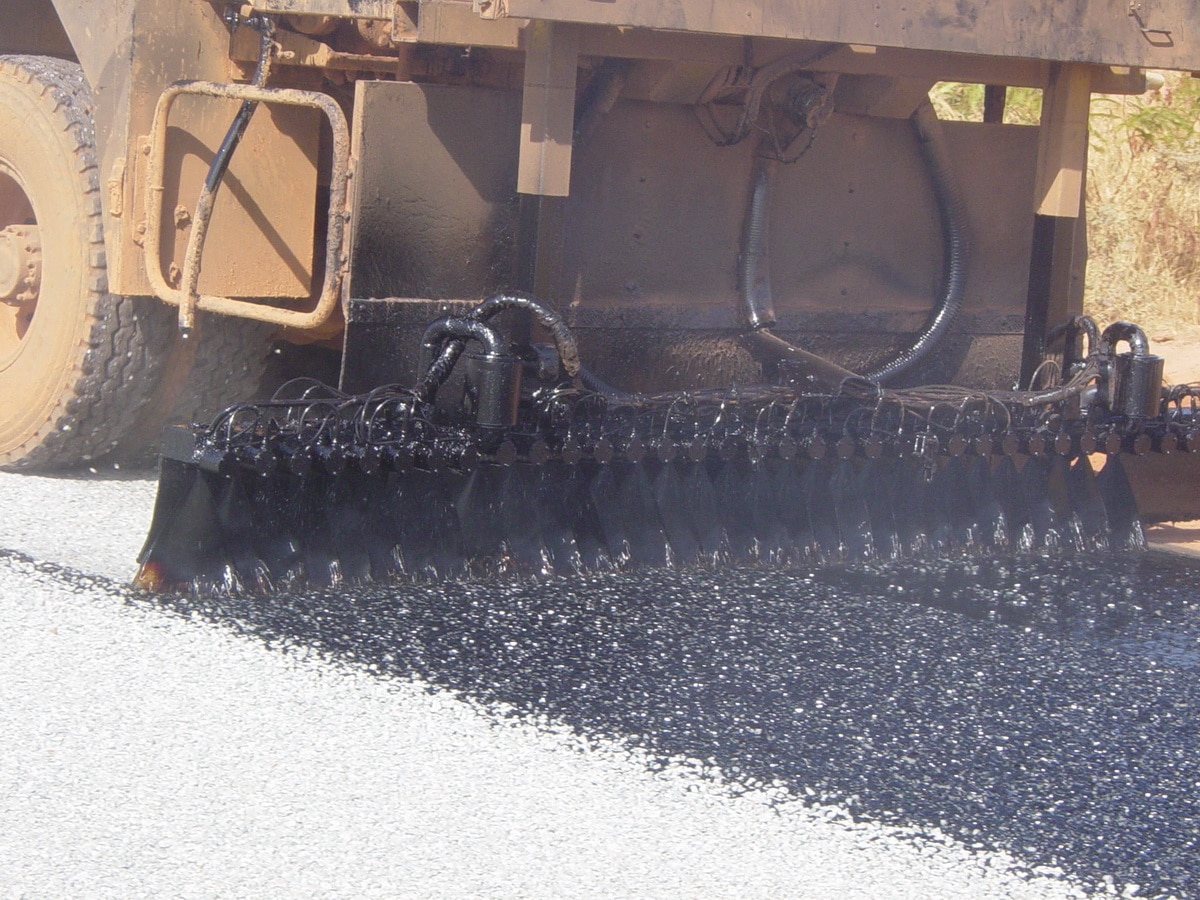 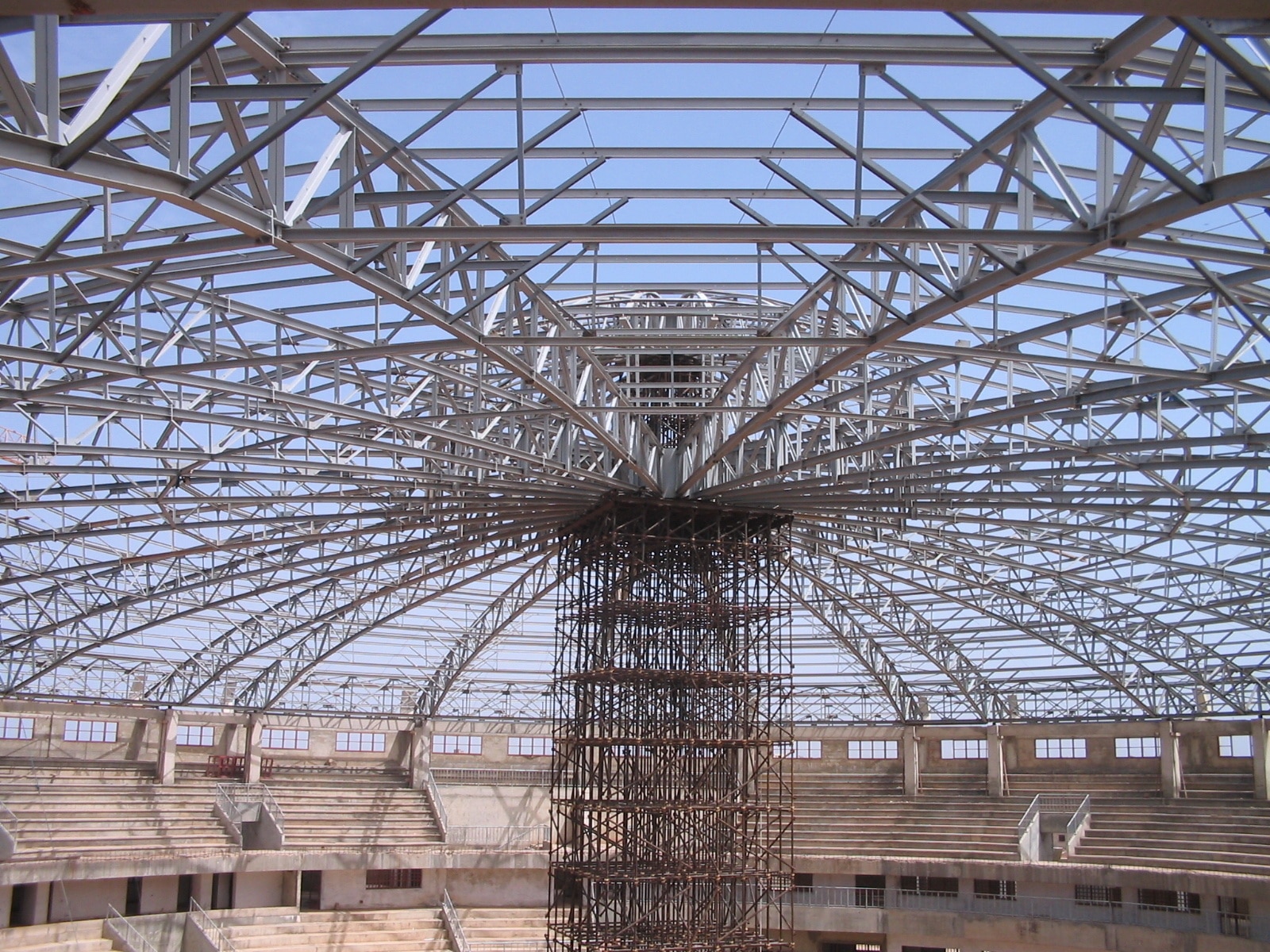 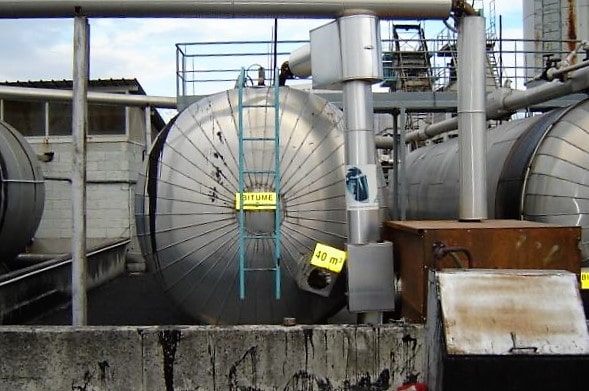 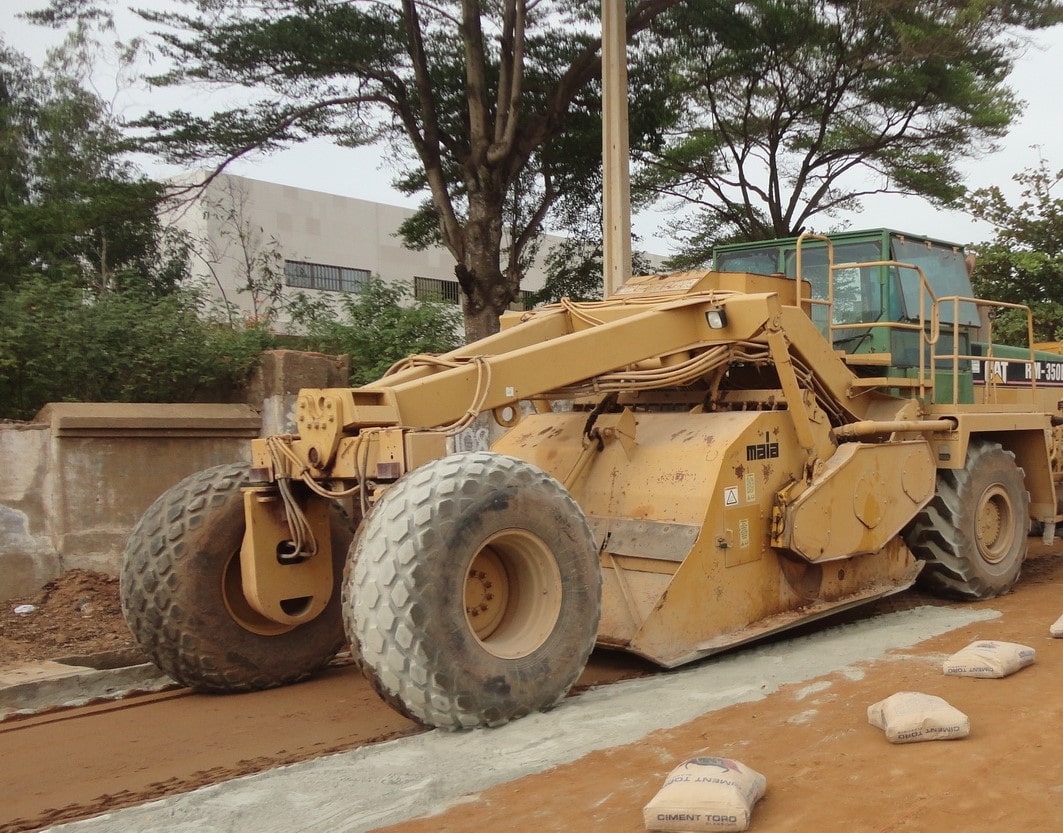 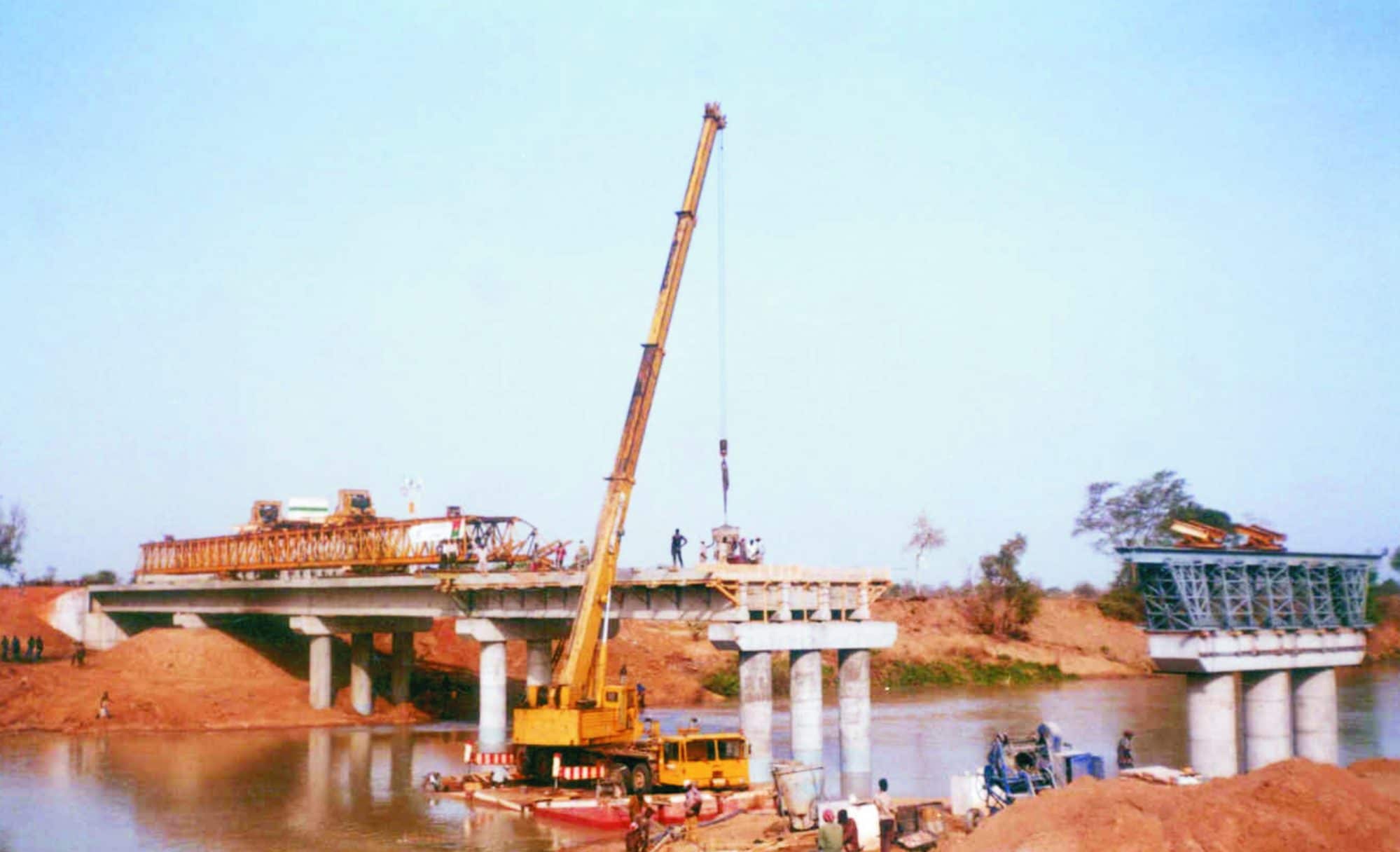